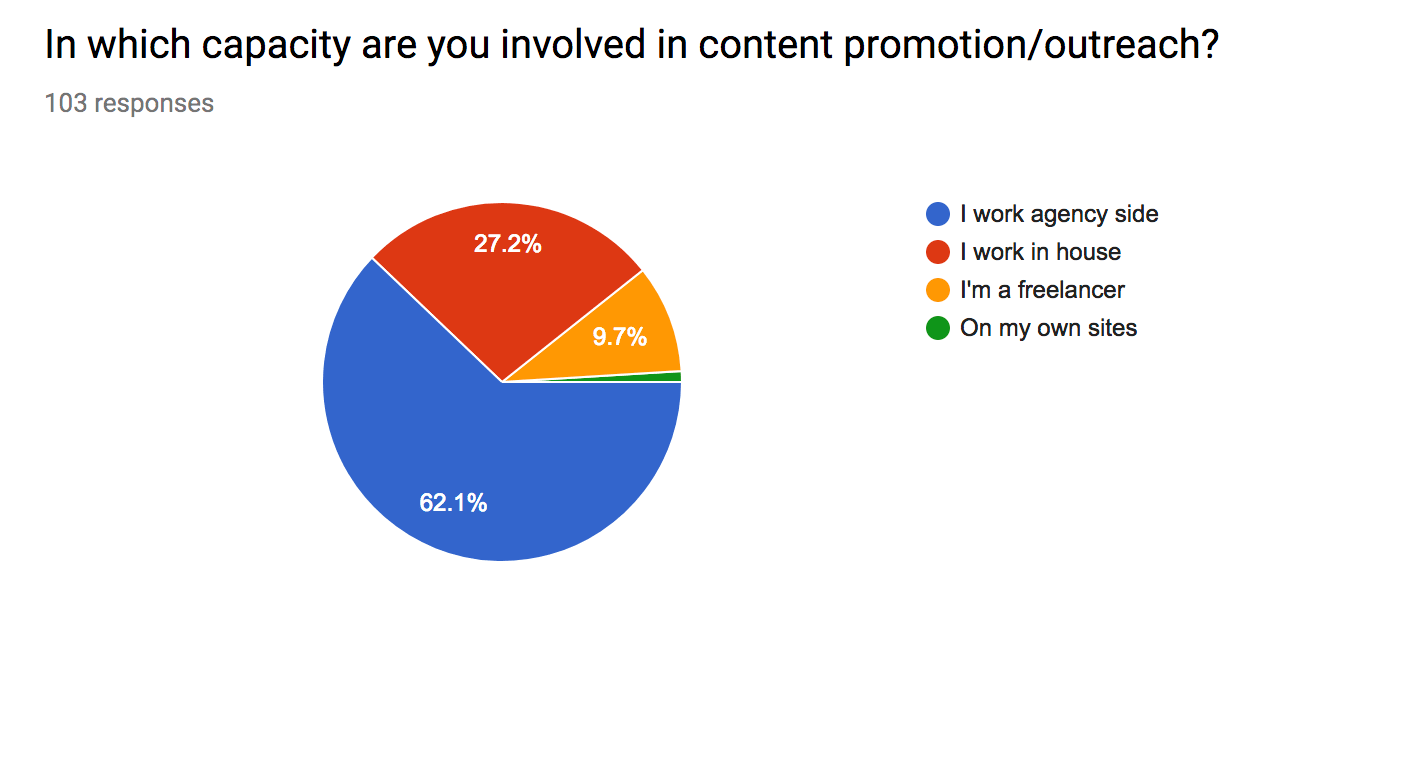 I’ve recently been preparing a talk for Verve’s amazing outREACH Conference. As a part of my preparation for that, I ran a small survey of people involved in content outreach and promotion using Google Forms. A few people asked whether I’d be making the findings available, so here they are.

This is by no means a scientific study. Before we even start talking about variables in this line of work, there’s a ton of other things to take into account:

I deliberately kept the survey short. I was primarily interested in:

So the bulk of my questioning was around that.

Who Responded to the Survey? 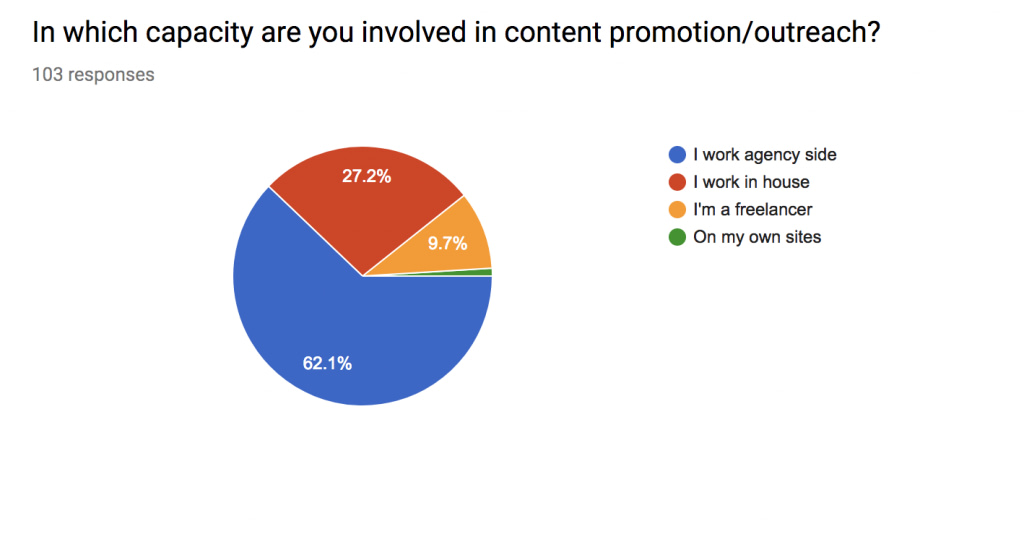 At the end of this post, I’ve included a raw download of all responses, so feel free to take that and run any of your own analysis as you see fit. But the main things I took away from this were:

How Much Time Do We Spend on Content Production and Promotion

I asked two separate questions here. The answers are below: 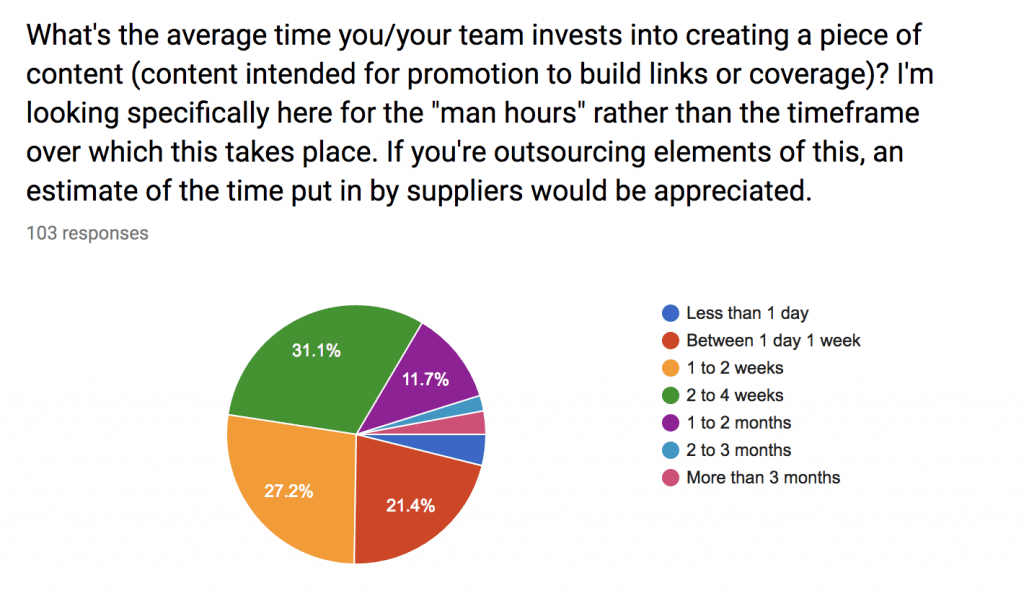 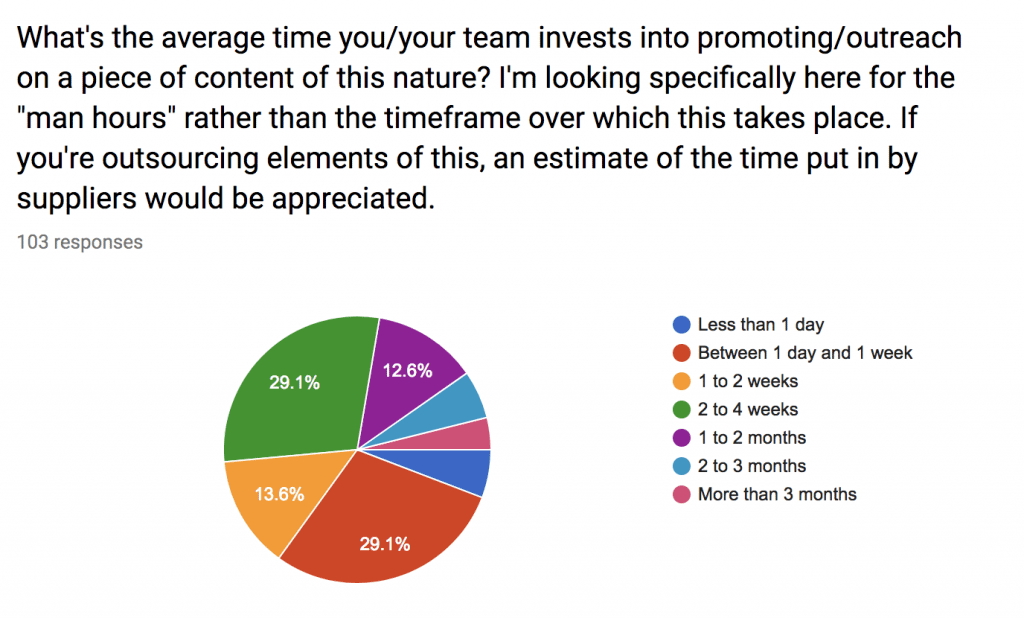 The answers here are quite broad, so a comparison between the two questions isn’t necessarily straightforward. For example, if someone is spending 6 weeks on content creation and 8 weeks on promotion, they’d give the same answer (1 to 2 months) for both. So it doesn’t allow for particularly granular analysis of how much time is being spent on one element versus the other.

However, when you do run a comparison (and take it as an approximate) it would appear that:

So for 70% of those responding, the promotion and outreach element is given at least the same focus and resource as the production.

How do we Space Outreach Out?

This is always an interesting one for me. In an ideal world, you’d crack on promoting content until you’ve exhausted every single avenue and hit every single relevant publication (certainly if your content isn’t time sensitive). Meanwhile, however, in the real world, we have budget restraints, other clients, other responsibilities and the practicalities of contracts to consider. So how to spread out and plan our promotion is often led by factors, I believe, like these.

So I asked the following question:

I also allowed for people input their own answer and some of those answers made for interesting reading (you can view them all in the raw data download at the end of this post).

Some of the open ended responses suggest quite people have a process that splits it a little (“10% pre 80% launch 10% later,” for example). And for many, it varies.

Nonetheless, the majority  appear to plan outreach as a one time “all in one go,” hit.

Again, how feasible this is depends upon scores of factors, many of which are not directly related to the content itself. Contracts, resources, budgets… it all plays a part in how much on going work can be put in. But I was interested to find out how much “re-promoting,” people do. 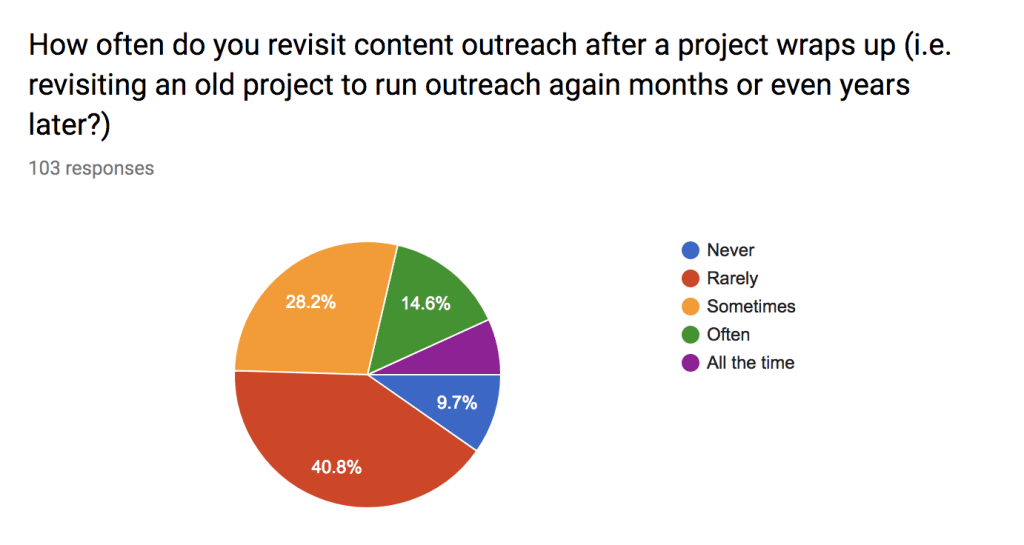 Outreach Targets and Hitting Them 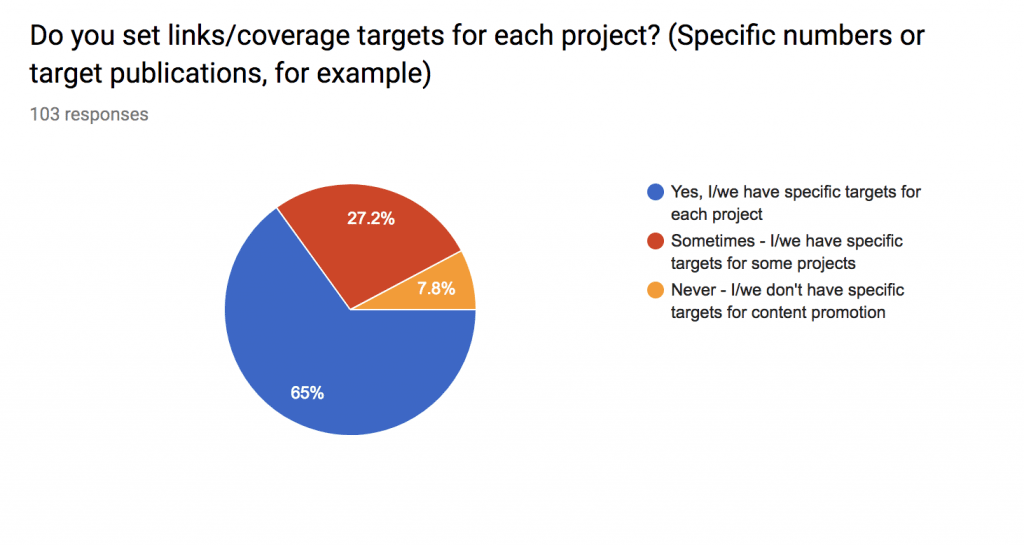 But… most people don’t frequently hit their targets!

This is the one that really had me thinking…

What this suggests, basically, is that for three quarters of people who took this survey, hitting targets is “hit or miss,” at best. Only a quarter feel they hit targets often or all the time.

And granted, there are all sorts of reasons this could be the case. Some people have unreasonable targets, insufficient resource or other non content related limitations.

But whatever the causes, this is a big deal, I think!

I’ve put all the responses in a Google Sheet. I made one modification from the original Google Doc at the request of a respondent who inadvertently included the name of the agency they work for and wanted it to be removed, but other than that, this is as answered. So please feel free to grab that here and analyse as you see fit!